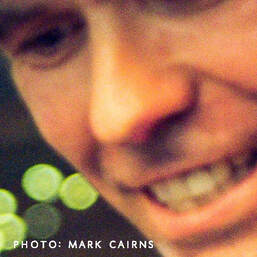 The Good Ones is the fourth single release from Andres' forthcoming second solo album. The song was released in late January '23 while touring Australia. It's a song about finding the right one, the one that fits for you, the one that is good for you. It's also about loneliness, about growing up, and about your relationship with the people that brought you up. -And it's a song about the value and rarity of kindness, musically inspired by Andreas' time spent in Austin, Texas. The production echoes the sound of classic songwriters like Kris Kristofferson and Willie Nelson, and dance bands at classic Austin bar venues like the Continental Club and The White Horse. 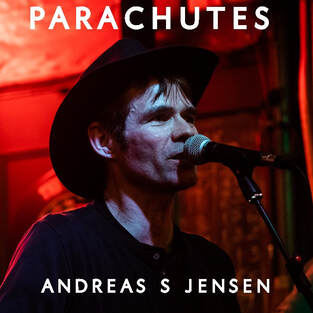 Andreas' December '22 single Parachutes was written by Andreas, Chris Sheehan and Iain Spinks on a 5 day songwriting camp in Devon led by Squeeze legend Chris Difford. Songwriting camps are like speed dating for songwriters. Every day the 12 writers were split into groups of 2 or 3 by Difford. Some days with a fixed subject and other days without. Parachutes' context is ambiguous. While it reads as a love letter, a "tell-all" about an impossible situation with two partners separated and one lover talking about "drinking the ocean dry" to bring the other one closer, the exact circumstances are mysterious. Like most good songs it isn't "giving it all away". Listeners will be drawn in by the catchy pop melody and Andreas's vocals and can fill in the blanks for themselves.

Adam Falkner: drums and percussion.
Peter Larsen: Piano
Andreas S Jensen: Vocals, guitars, bass and production.
Cover photo: Simon Partington @Spart Studio Photography
Parachutes was released December 2nd 2022 and can be bought on all good streaming services. Andreas’ album Keep Sane inspired by his many visits to The House Of Songs in Austin, Texas will be released in 2023. 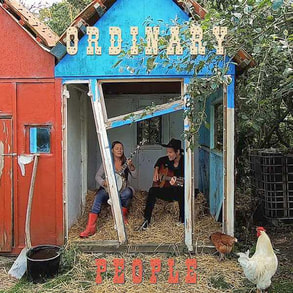 Andreas' 2nd lockdown release, the single 'Ordinary People' was a collaboration with Queen Of The Banjo Sine Bach Rüttel, session player to the stars on the Danish folk rock scene and an artist in her own right. The song was a co-write between Andreas and hit songwriter Joe Killington (Nottinghill Music) and is recorded as a duet between Andreas and Sine, obviously also showcasing Sine's fantastic banjo skills, with Nikolaj Bjerre on drums laying down a mean train beat, double bass by Nana Schwartzlose and Andreas on Acoustic guitar,organ, hand claps and production. Imagine an uptempo skiffle beat as a counter point to a fairly melancholic lyric describing a retrospective contemplation of a love affair -the feelings of temptation,resistance, guilt, lust, self loathing and empathy for the scorned partner back home. Musically it is best described as being reminiscent of Bob Dylan, Tom Petty, The Birds and Early Eagles, but with a fresh new melodic approach.

You can magine it or just press this LINK and listen for yourself. 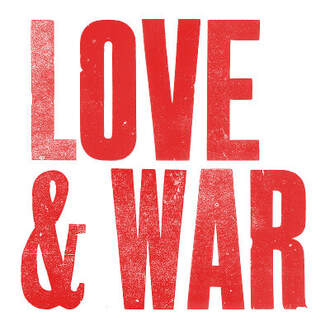 Andreas' single Love & War was released during lockdown in the summer of 2020. The spectacular video, filmed on the Danish island of Møn, was shared close to 400 times on Facebook. The song was written at The House Of Songs in Austin, Texas with local singer-songwriter Dustin Welch who also contributes with banjo, fingerpicking- and slide guitars. Jack Cowens and Dave Oliver plays the drums and Andreas the rest. Love & War is packed with Americana and Alt Country influences and is a clear departure from Andreas' Indie rock inspired 2017 debut.

Song description:
Love & War erupts from the sound of crickets, intimate vocals and an acoustic fingerpicking guitar to a big anthemic country rock chorus, describing the battle to reclaim lost love. The picturesque lyrics uses nature imaginary (the wind, the moon, the fields etc) as metaphors to express the narrators internal fights, hopes, and worries in a love triangular drama.

The single is released with support from Koda's Cultural Fund.

....And a great piece from Nordic Music Review 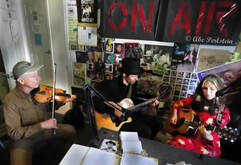 Andreas also popped in at the 'Tuesday Lunch With Abe Pearlstein' show on The Rock (97.3/107.9 Mhz), and is here seen jamming with Abby K and John Roy Zat. (photo by Abe Pearlstein). 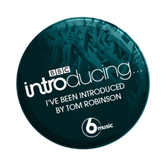 "This track’s mix of acoustic and power ballad is very effective. He has a strong, quite distinctive voice of the classic indie rock variety, and Trust Is My Anchor displays it nicely"
-BBC Radio6 Fresh Faves 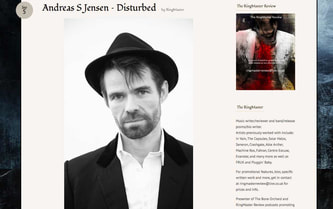 ​Here's The Ringmaster Review of Disturbed, the album. 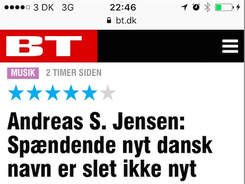 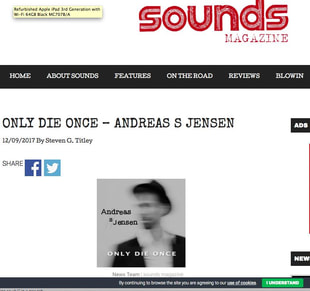 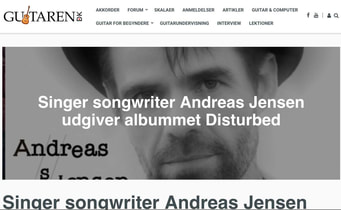 "Songwriting is like good sex" -from Guitaren.dk (in Danish, sorry....) 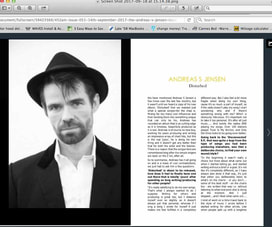 GuitarQuarterly is back here with a
full length interview about Disturbed 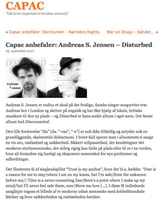 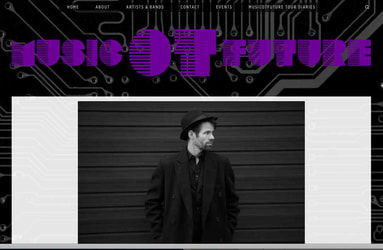 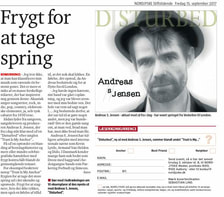 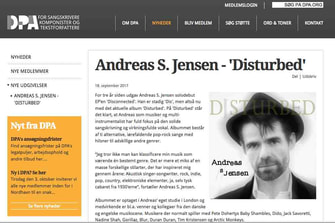 Trust Is My Anchor has also received loads of airplay.
In fact more than 100 radios have played the song.
​New single Only Die Once is about to surpass that.....
​ 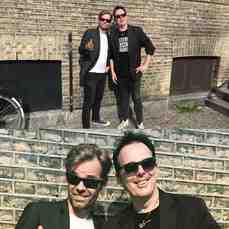 ​Here's an interview (in Danish) I did with Vesterbros Rock Radio on August 25th: tinyurl.com/VesterbroRockRadio 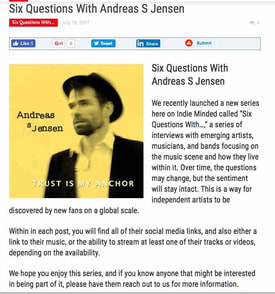 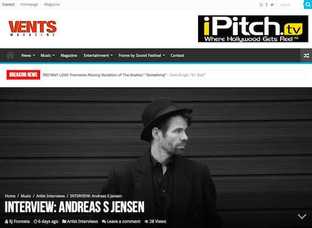 
​A great write up in ventsmagazine.com 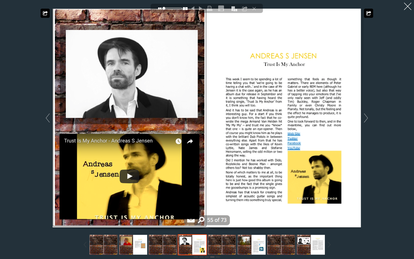 Wow. Really nice words here from @GuitarQuarterly -a magazine for the thoughtful guitarist..... 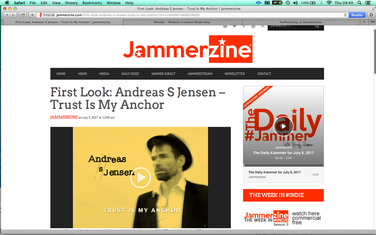 If you want to know a bit more about my producer/writer background, the forthcoming album Disturbed, or Trust Is My Anchor then read it all here. 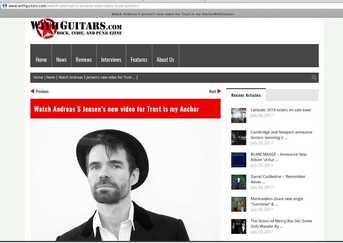 3/7/17: Tell Indieminded.com what you think of Trust Is My Anchor

And here's The Ring Masters Review of Trust Is My Anchor.
-Worth reading. Great music blog btw. 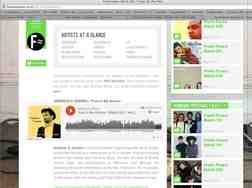 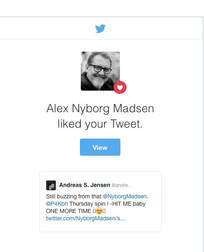 Danish National Radio DR4's legendary dj
Alex Nyborg Madsen soon retaliated ...and followed it up with more plays...
And lots of online radios took it further..... to date more than 100 stations have played Trust Is My Anchor. Check Twitter for in depth details....
TAKE MY HEART AND GO,
​released 2014 - MEDIA AND QUOTES :
​
-and was playlisted with daily plays for weeks, at Voice FM 103.9, at Radio Plus in Coventry.... and at Radio Langeland in Denmark.....
-And then there was plays on Brfm Vault, ReprezentRadio London, Blyth105Radio, Warwick Uni Radio, Sine FM, EGH Radio, ICR FM, Brooklands Radio, Colne Radio, 956BRFM, RFTK Radio, Leisure Fm, Vixen 101, Riviera FM, PenistoneFM, and ARFM, plus all the ones that I've missed...

The song got a write up on the Captain Sib podcast and on The Musical Outcast blog, plus on Steve Muscutt's Listening Post AND it ended up on Mi7Records/emerging-artists list...

﻿QUOTES:﻿
﻿I like this guy’s style, love the vocal delivery and that kinda nostalgic overall sound it has. Chris, Bauer Media﻿

I really like this one! Will give it a play on tonight's show. Cheers !
-DJ La, Reprezent, London

I quite like this track so will play it on one of the new music shows.
Olivia, Warwick Uni Radio
Thank you so much ! Looking forward to playing Andreas on Sunday.
-David Durant, BROOKLANDS RADIO